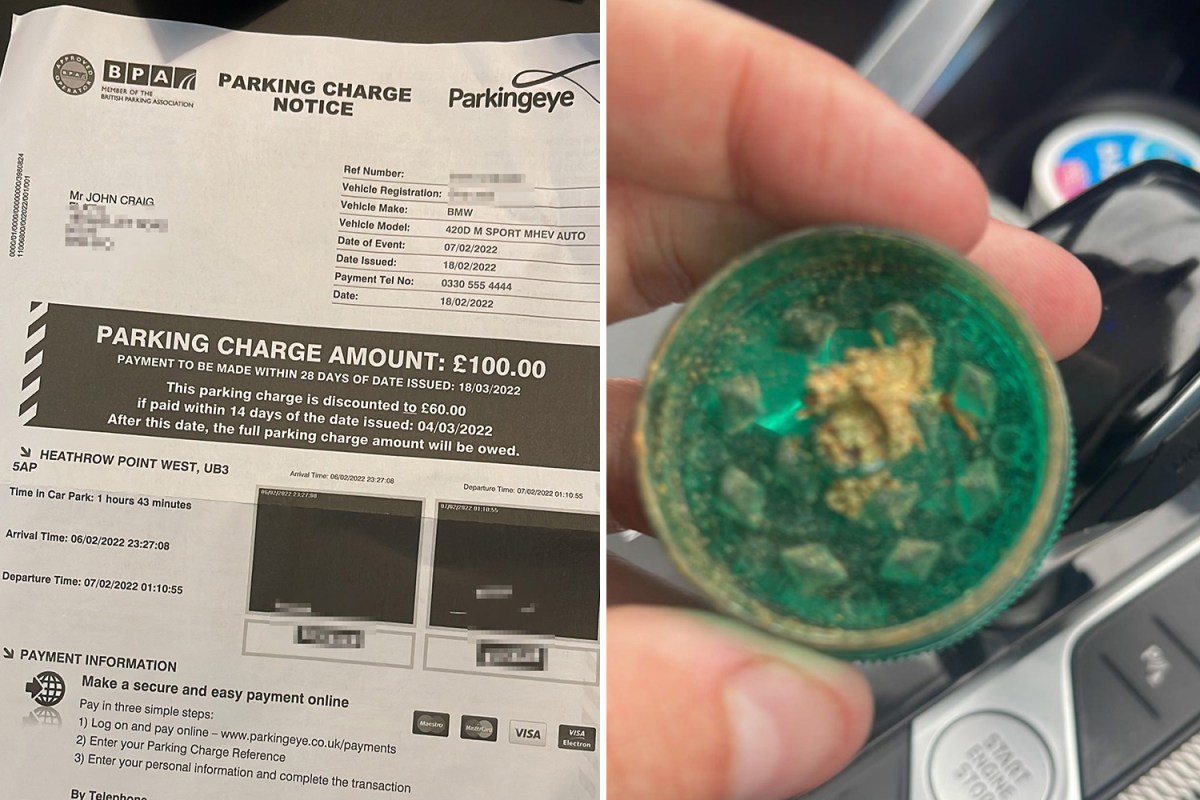 John Craig, 39, also discovered that the interior of his car had been completely ransacked, with three deflated tires and “used as a cigarette bin”.

To top it off, the culprits had left a weed grinder, added 250 miles to the clock, used up all of its gas AND drained the windshield fluid.

John, a tattoo artist from Brighton, told The Sun Online: “I was scary and blinding – I was fuming”.

And to make matters worse, the company refused to pay them.

In the letters seen by The Sun Online, John’s car can be seen charging when it was supposed to be in the custody of the parking company.

A half-burnt cigarette is also visible under one of the seats.

John said he made the horrific discovery after a three-and-a-half-week vacation in Miami, where he had been on a cruise.

He says he booked through EzyBook and chose the Enigma car park, at 120 Bath Road, Harlington in Hayes near Heathrow Airport, to look after his car.

He paid a whopping £110 for the privilege, but the company charged him £40 for being a day late.

Discussing the events, he recalled a bizarre moment when the company “twisted me around” when he put the engine down.

John told MyLondon: ‘The warning signs were already there when they said they would ‘try to get my car back to me’ when I got back.

After recovering the abused car on February 14, he told The Sun Online how a young boy dropped it off and immediately got into another car.

He added: “I was driving home and thought the car smelled like weed.

“I was jet lagged so thought I must just be tired but the smell was so strong that when I stopped to refuel I looked around the car.”

He added that that’s when he found a grinder with more weed and cannabis paraphernalia all around his car.

Surprisingly, when he complained about finding the alleged weed and grinders, he claimed Enigma told him “it could be one of your friends”.

He later said an Enigma representative told him that young workers “like to smoke weed” while driving.

John also said he had to stop to refuel because the parking company drove him dry – despite filling the tank before driving off.

He also alleges that he was repeatedly called profanity while dealing with Enigma as his investigation was passed on to several members of the company who all made multiple promises of refunds.

John has still not received a refund and it seems unlikely that he will – government records show Enigma went bankrupt on March 1.

He criticized the experience as “a disgrace” adding that he had worked hard for the new car which “still stings grass”.

EzyBook also told John that it would remove Enigma from its booking service, before it officially disbands next month.

This will be the second time the company has gone bankrupt, according to company records.

Reflecting on the experience, John told The Sun Online: “There’s nothing I can do about it.”

He hopes the car was not involved in any crime and hopes to have the parking tickets overturned.

In the meantime, his story has been covered by Crimewatch.

Heathrow Airport has declared that Enigma and EzyBook are not recognized HAL providers.