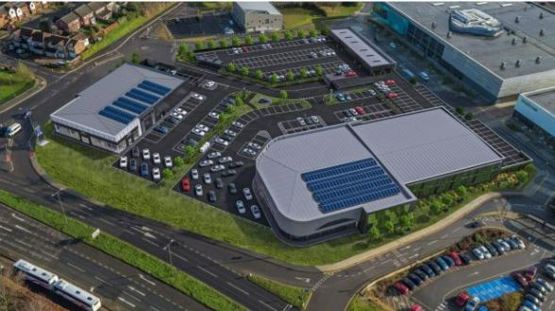 The UK Porsche and Bentley dealership networks are set to expand once the AM100 Rybrook dealership group completes construction of its latest development.

A site in High Wycombe which previously housed a leisure center is now being redeveloped to become a new home for two stand-alone showrooms for luxury car brands Bentley Motors and Porsche.

Currently, High Wycombe’s wealthiest residents have to travel nearly an hour to Reading or Hatfield to browse the latest cars from the Porsche and Bentley ranges.

The site, accessible by the same road serving a Waitrose supermarket and the city’s park and ride service, is being developed by Dealership Developments, a company owned by Rybrook Group, which already represents Porsche in Chester and Bentley in Bristol.

It follows a continuing trend among UK franchise networks for multi-brand locations, where some operating costs may be shared between several dealers.

The High Wycombe property will be occupied by a 3,935m² Porsche Centre, a 1,655m² Bentley dealership and a 492m² car preparation workshop, as well as car parking and showroom space for approximately 200 cars.

In 2016 Rybrook opened a new site in Bristol which it had developed to house showrooms for Bentley, McLaren, Rolls-Royce and Lamborghini.

Cambria Automobiles opened neighboring McLaren and Aston Martin dealerships in Hatfield next to its Jaguar Land Rover site before the pandemic, and HR Owen is currently completing its own luxury car destination just down the road in Hatfield which will house the showrooms. Lamborghini, Maserati and Bentley exhibition plus a multi-brand used supercar showroom.