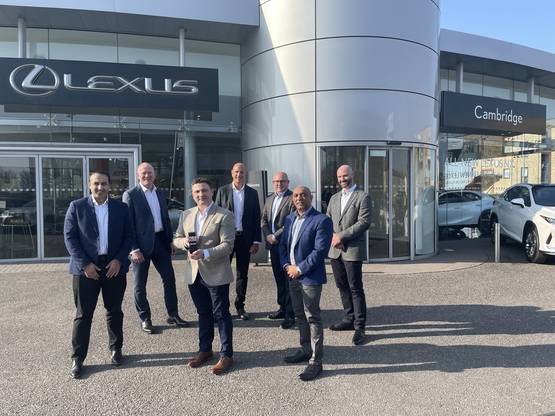 The Lexus dealership of the Steven Eagell Group in Cambridge has been celebrated among the top franchise car dealerships of the premium Japanese brand in Europe.

The dealership, which won the Center of the Year award at the Lexus UK Center of Excellence Awards in February, was one of 10 European franchisees to receive a Lexus Kiwami Award.

The annual award, now in its sixth year, recognizes the top performing dealers from over 300 across Europe.

Pascal Ruch, Vice President of Lexus Europe, said: “The fantastic success of Lexus Cambridge and our other Kiwami Award winners is only possible through strong leadership, teamwork and a continued focus on the ‘omotenashi.

“My thanks go out to everyone for their continued commitment and delivering the Lexus ‘Incredible Experience’ to our customers. »

Steven Eagell, AM100 Group Managing Director Steven Eagell, said, “We are extremely honored to receive the Lexus Kiwami Award, a phenomenal accolade that validates the team’s continued commitment to providing the most exceptional service to all of our customers. .

“Furthermore, I am extremely proud to see the Cambridge team recognized as Center of the Year in the Lexus Center of Excellence Awards. This outstanding performance is a testament to the hard work and dedication of each member of the team.

Earlier this month, AM revealed that Steven Eagell Lexus Cambridge was among the finalists for the 2022 AM Awards, appearing in the Dealer of the Year category.

Steven Eagell Group also appears in the Dealer of the Year (over 10 locations) and Franchise Workshop of the Year lists, the latter with its Toyota Birmingham dealership.

In February, AM announced that Steven Eagell Group won nine categories in the annual Toyota and Lexus Dealer of the Year awards.

Speaking at the time, Eagell said: “It gives me great pleasure and immense pride that the Group is being recognized by both Toyota and Lexus with these awards.

“It is the hard work, dedication and commitment to exceptional customer service of the entire Steven Eagell team that has earned us these awards.

“Everyone can be exceptionally proud of the part they played in this outstanding achievement.”